First of all best wishes to everyone for a very merry Christmas and a healthy and lucky New Year from the Neive Baldwins. An exciting year with lots of celebrations but weird weather which has left lots of our neighbours scratching their heads. Damp periods have meant that it has been a year when everyone has worked extremely hard to maintain the quality of the grapes. Constant green pruning has left yields substantially down, particularly in Barolo which also suffered from hail. Attention to detail and September sun has generally maintained excellent quality in Barbaresco.

The upside is the porcini and truffles are wonderful. Our friend Valerie Q explains it well in an article she wrote for WinePass . For us and our visitors it doesn’t present a problem as we still seem to buy rather more wine than we drink. Even the occasional party doesn’t help as guests often bring more than they drink! However, a real upturn in tourists following the Unesco World Heritage announcement and a decline in the popularity of Bordeaux has seen a lot of wines selling out rather quicker than usual. We’ve tried to party very hard with me qualifying for a meagre State Pension; where did all that 40 year’s tax and NI go (answers on the back of a cheque)? I continue to pay much more than the State returns!

Her Outdoors also celebrated her second 30th with local friends and 4 gorgeous grandchildren and their mums, and the most amazing Porchetta supplied by I due Regni . July saw a visit for the first time from her brother, sister and families which resulted in 19 of us together at Via Gallo. Everyone chose their 5 favourite songs of all time and we played Desert Island Discs over a couple of evenings; memorable. 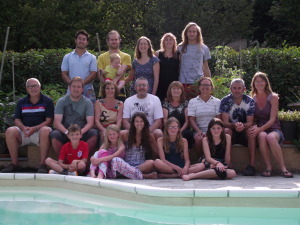 2 weddings, one in the UK and one here, provided a dramatic contrast.  Booming disco and beer versus a 4 piece sax and drum ensemble and Piemontese wine in the sunshine at Abbona  in Dogliani were both fun. My Luton cousins’ family, the Garglers, continues to expand at a dramatic pace, breeding a succession of disco dancers that makes it difficult for us Baldwin’s to compete on the dance floor, particularly as HO and I were on our own with no nebbiolo to loosen up. I preferred shuffling around with my indomitable aunt Laureen, who is already luckily hard of hearing, and to catch up with my cousins from Canada.

This year I have not visited that many new cantinas as our friends and family are still only scratching the surface of our knowledge and tasting at our closest neighbours is easiest. Having said that we have fitted in a couple in recent months in Barolo. As a prelude to Val & Evan’s wedding I accompanied a group of their friends on a tasting tour to a couple of our favourite cantinas, Ca del Baio and Claudio Rapalino (including an excellent lunch) followed by Brezza founded in 1885 in the centre of Barolo village. Despite the hindrance of Val not having adapted properly from the 12 to the 24 hour clock and a particularly unhelpful driver we arrived rather late but fortunately our host Amanda Courtney was charming and accommodating  and gave my Italian a welcome break. They are well set up for “walk-in” tastings and very traditional. I still struggle with tannic young Barolo but the Cannubi and Sarmassa 2010 in particular had lovely finishes once you fought through the tannins: a long life ahead for them. The Dolcetto 2012 was fairly typical, fruity with an “amaro” finish. Good Barbera d’Alba Superiore 2011 which exhibited a leathery/tar nose and Langhe Nebbiolo 2012 which had a particularly pretty nose.

I loved the enthusiasm of Edoardo at Cascina Fontana which is in Perno, Monforte d’Alba. It has been in Marco Fontana’s family for at least 6 generations and the use of a chestnut barrel sourced locally adds to the sense the history. Super Barolo & Langhe Nebbiolo.

Regular local tastings are a delight and we spent a few days helping Pete & Iona Henry find  wines for their new wine venture which will hopefully take off in 2015.

It’s hard to generalise on everyone’s expanding favourites but this year we have seen them buy:

The “Metodo Classico” Bruts and Rosés of Deltetto and Francone eclipsing champagne and prosecco in their wine stores, and the new Spumante of Cascina Saria is gaining everyday popularity.

Guido Porro, Stroppiana & Lodali are included in the Barolos.

Visits to foreign parts, Lucca in Tuscany to see my hero Nile Rogers and the Eagles, Verona for Romeo e Giulietta, Rome for the 6 Nations v England, UK to see the kids and grandkids and other parties including Ferragosto,  a Riesling tasting da noi, awesome BBQ at Caterina e Eugenio’s from La Torre, and Johnnies Xmas turkey lunch at Jyrki & Rikka Sikula’s helped keep us reasonably busy

Now we are preparing for the next visitors to celebrate Capodanno with the added fear that Franco Rocca has a new microphone!