A last minute arranged visit to Cascina Saria at the weekend for 2 Norwegian visitors confirmed just what good value their wines are. I love their tasting room overlooking Coazzolo and Castagnole delle Lanze and the reception accorded to us by Maura and her father Giovanni & Mama Maria was as warm as ever. Not to mention Marco who’s growl is worse than his bite. Maura’s enthusiasm unfortunately speeds up her Italian but it’s a great yardstick (I suppose that should be metrestick) to measure my linguistic progress: verdict-some way to go! 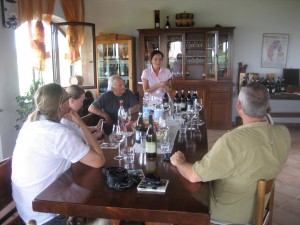 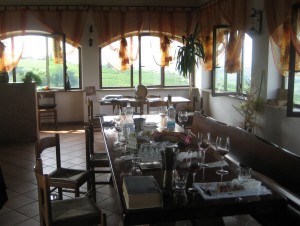 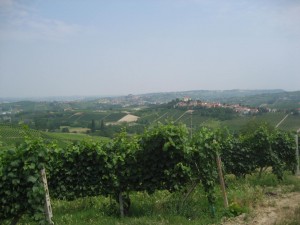 We started with the Chardonnay which is only in its second year of production followed by their 1st year Arneis (at 14% beware) and despite not being very cold were eminently drinkable with a finish that said “more please”. In fact they screamed at me and a dozen of each jumped in the car. The rosae is unusual and really full bodied made from 80% Barbera and 20% Nebbiolo: not a wine to be drunk on its own but with a pile of berries. The Barbera Vigneto Convento (fermented in stainless steel) is, I think,  the best quality/value everyday red I have tasted in the region so far. There is nothing to dislike about it, particularly the price at around €4 a bottle. The Barbera d’Asti Vigneto S. Lorenzo 2007 is a step up in class with 10 months in wood and the Langhe Nebbiolo 2008 could easily be mistaken for a good Barbaresco at a blind tasting. Last but not least we tried the 2005 Barbaresco (Canova) same as their neighbour Ressia. I have already bought this in magnums along with the 2006 and have an order in for the 2007. Everything you want from a Barbaresco and as we talked about it it evolved in the glass; what a fantastic grape Nebbiolo is. At around €15 it is a must-buy and competes with La Ganghija in Treiso for the best buy-prize.