With no significant rain for over 2 months, watering the garden has become a chore and with chickens to be chased the evening routine can take almost 2 hours. One possible solution is to install an automatic watering system so having sought advice from a couple of mates last week we set off to buy the bits. We had looked up local official Claber stockists on the internet and punched the address into TomTom. Non c’è! We could see roughly where it was from Google maps but it was hiding so on to the next big store near the market in Alba; closed for a long weekend! This was slightly unusual as Italy usually closes for the month of August but I suppose it has been unseasonably warm. Being blessed with the patience of a gnat, and not totally wedded to the idea of DIY, I called our local gardening expert Corrado and asked if he could pop by and give us some ideas and an estimate of the costs. He was on his way to Barolo to see a client but would pop in late morning. As we knew from the past this timing would be dubious and waited for the call. 12noon he rang to say he was a little delayed and had to eat first so was 2pm OK? No problem: he turned up at 4. To cut a long story short, after 2 hours we discovered we have about 20% of the water pressure we need and the reservoir in the hill doesn’t have enough water and is, anyway, too far away. The vegetable garden is not a problem as we can put in a “leaky pipe” with a timer cheaply. The grass and rest of the garden is a different issue altogether and we will need a pump, electronic valves and possibly a new tank to run it from. At least I saved a few hundred Euros on the Claber kit but who knows where this project will end.

Talking of projects, what’s the worse job you’ve ever had? According to Derek & Clive (aka Peter Cook and Dudley Moore) it was cleaning up Winston Churchill’s bogies. I would have preferred that to painting our rear terrace. Having painted it 3 times in as many years it was time to review the modus operandi. Now with all the Old Masters in Italy you would have thought that buying decent paint was not a problem. I suppose  the ongoing renovations to their works e.g. the Sistine Chapel should have given us a clue. It hasn’t got any better Michaelangelo! Fortunately we had some decent masonry paint left over from the UK and we set out to strip the wall properly this time as it was seriously flaking in places. After several messy days and grazed knuckles, a brainwave, Sveniciatore (paint stripper)and an air-compressor to blast  it off. 6 tins and 2nd degree burns later Debbie’s power washer completed the preparation. It also took 7 year’s algae and rubbish off the teak garden furniture that had lived out permanently in the garden in Eastbourne. Teak oil is also time consuming and extremely messy.

The painting is almost complete and I hope that Les’s new highlights and our spattered bodies will eventually become clean but decent paint actually sticks. Looks nice with the new awning though. 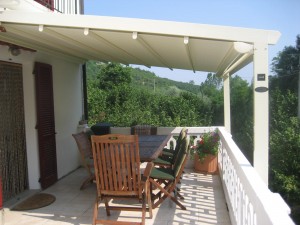 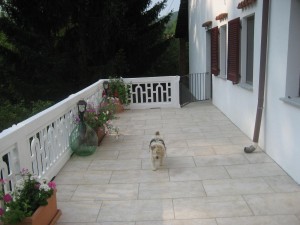 Our continuing conversion to things Italian continues and my driving licence application is in. I found, by accident, a bureau in Alba who handle all these things for you and they arranged  everything including the compulsory medical with the military doctor. I didn’t know what to expect but it was rather more than the read the top 4 lines on the chart and distinguish a red paper clip from a green one. Several stamps and signatures later and now all it needs is a couple of months to be processed, not including August. Re-registration of the car looks like being rather more difficult as it needs a roadworthiness certificate that can only be carried out at specialist centres and unfortunately Honda is not spelt F I A T. The computer will take a few days to warm up so I expect a call on Friday to tell me where to go.

A record egg day yesterday (7) which means both gangs have layers. The “Super 6” are very well behaved and rush to greet us when we go up to put them in for the night. They treat us like Rock Stars, throwing themselves at our feet to be petted. The “F***ing Five” on the other hand, still don’t like me and despite treats and kind words simply leg-it. I now have my own pecking order and have named the ringleader Christmas.