Before I moved to Piedmont I had always  associated Uncle Bulgaria with the Wombles of Wimbledon Common, then I met Edoardo Miroglio. In addition to his Tenuta Carretta in Alba he has built the most extraordinary winery on 1,200 hectares deep in the heart of Bulgaria. It boasts 16 different grape varieties and currently produces 500,000 bottles of award winning wines. From a distance it looks like a fortress and reaching it almost demands a military operation: a 2 hour flight from Milano to Sofia and then a 3 hour journey by road. In our case a hair raising drive in thick fog but the hotel and the nerve soothing glass of bollicine (bubbles) awaiting us was worth the effort. For those of you that would dismiss Bulgarian wine without so much as a sip, think again.The ultra modern austere exterior can’t prepare you for the heavily oaked comfort of the interior and the elegance of the tasting room which proudly displays the numerous awards won. The cantina is built on a spiral design  with 3 levels underground, topped by the Hotel Soli Invicto with just 7 studios and 3 suites. 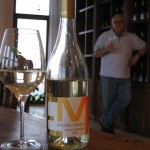 As an extended holiday destination there is not enough to see and do in the surrounding countryside but for somewhere to stop off for a couple of days and unwind and enjoy a wine challenge it is perfect and just 1hr 28m drive from the Black Sea. Edoardo says 1hr 15m but he drives too fast for the potholed roads.

Edoardo was the perfect host and we were treated to a tour of the extensive cantina, followed by a formal tasting of the various Champagne style bubbles he produces and then dinner.

We had been looking forward to a sumptuous game dinner supplied by some other guests who were hunting that day. Wild boar perhaps, hare or at least the partridge who gather by the kitchen window but niente, zilch, nothing. It was the wrong kind of grass (long and razor sharp) and without a dog to set the prey we dined on excellent fish wrapped in aubergine and blue cheese accompanied by the winery’s best. There is not enough space here to detail all the awards Edoardo’s wines have won simply look at the Elenovo website , but for my taste I would particularly single out:

Pinot Nero Reserve 2006 – and the “ordinary” Pinot Noir: a welcome change from Nebbiolo and Barbera