It’s been a hectic few weeks that has included a trip to the UK with golf , another visit to the San Siro, a couple of tastings, some good meals and unsuccessful visits to the car registration centre.

I still continue to serve as a Trustee at the Bader International Study Centre at Herstmonceux Castle and Board meetings there provide a good excuse, if I needed one, to book a flight and visit the kids. If you have never visited the grounds or the adjoining Science Centre, I would urge you to go; it’s a magical place and always brings back special memories. Dinner with colleagues there in the evening also reminded me that pub food in the UK is improving even if the wine lists are pretty limited and boring. The Merrie Harriers in Cowbeech has good interesting food. Crispy pig cheeks on a bed of pickled cabbage and capers, fennel risotto with Jerusalem artichokes are not something you would have expected on a menu a few years ago.  Foresters Arms in East Hoathly where I ate with my daughter and partner provided a good game pie and a half decent Rioja but the English sickness of serving huge portions of chips and 48 vegetables makes life difficult for someone who was brought up to always clear the plate! The Red Lion in Hooe is  an atmospheric old smuggling inn and the fish pie, lamb rump and vegetable lasagne were all good. Wot no curry? The best value and my favourite in Eastbourne, where there is usually a deal, is the Tiffin Express.

The colonel and I took on my son Ian and his mate Dave/Guy at the Royal Eastbourne and proved that 2 good old ‘uns are usually a match for the youngsters: drive for show, putt for dough probably sums it up best.

So having stocked up with groceries stuffed into my golf club carrier I made a rather startling discovery at the BA check-in desk at LGW. The maximum weight for a single bag is 32kg and my bag was well over 40kg. Repacking a bag in front of a long, pissed off queue is not the best start to a flight but I managed to expand and stuff my carry-on bag and lap top bag with shoulders of lamb, granary flour, sushi rice etc but mint sauce and sushi ginger were viewed as potential explosives at security  and confiscated. My hand luggage was now more than 20kg although partially offset by the weight I lost carrying it to the gate and getting it into the overhead locker. 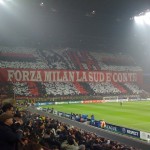 Another visit to the San Siro saw the magnificent Spurs start their voyage into the last 8 of the Champions League. The whole experience was made even more enjoyable when a Milan fan 3 or 4 rows in front of us asked for us to be silent after Crouch’s goal as we were seated in a Milan section. When his gestures and cries of “silencio” had no effect he and his wife left (along with a few thousand others) before the end. Already booked for the Real Madrid’s Bernabeu stadium and can almost taste the Jamon Iberico.

Back at home we visited another couple of neighbours. Cascina Longoria which has been in the Toso family for several generations.

They have 2 locations, one in the historic centre of Neive and the other just outside overlooking the vineyards with the town providing a panoramic background. Bis Nonno (Great Grandfather) was a mixed  farmer growing cereals and keeping animals and that tradition continues. We discovered as well the difference between our two local butchers: Ivano buys their female animals while Cordero specialises in males. The Arneis had a sweet nose and was Corrado’s daily favourite but for us was a little too frizzante and without the level of acidity we have become accustomed to. The Barbera d’Alba 2009 however was spot on and a good smooth, fruity example of the genre. The 2007 Barbaresco, although a little cold, was the reason we were there as we had tasted it blind at last year’s Barbaresco a Tavola and noted it as good value. It has a sherbet, aniseed nose and a simple light elegance like many of the vintage but a decent length. Decent Nebbiolo at a very reasonable price. We would like to have bought the home-made 1 year old salami that Corrado served us but unfortunately the 4 that were left were for the family.

Our friend Kerrie from Barolo who runs the ExperienceIT tours business introduced us to Renato Fenocchio in Barbaresco, a small producer who we had not previously known. A small range but his Nebbiolo will become a regular tipple. The 2008 Langhe Nebbiolo had a fresh intenstity and his 2007 Barbaresco Starderi was classic leather/tobacco with soft tannins yet good length. Like many producers here, Renato believes that their wine should represent the grapes and the terroir with minimum chemical intervention.

We were also able to taste the 2008,9 and 10 from the vats/wood which will take us back regularly in the future. The Barbaresco is also available in bigger volume bottle, magnum, 3L and 5L and they will personalise the 3 and 5L with hand caligraphed labels: great for special occasions. Just to reinforce the pedigree, via their friend Sam Kass who is a chef in the White House (yes Washington DC), their wine is actually served there!

The saga of re-registering the car in Italy continues and after 2 more visits to the service centre in Canale I discovered that they have passed on the process to another office. They can’t cope with GB plates on a Swiss, left-hand drive car. The UK may pretend to be in Europe “ma siamo in Italia”.